As a highly populated state, Massachusetts consumes more electricity than it generates. To be exact, it consumes 12 times as much as it produces. However, Massachusetts is also a leader in renewable electricity generation technologies. Read on to learn about the fast-changing landscape of energy production in the Bay State.

As coal and oil production in Massachusetts dropped, natural gas production doubled. Natural gas is the most common electricity generation source in the state, fueling two-thirds of its electricity production. 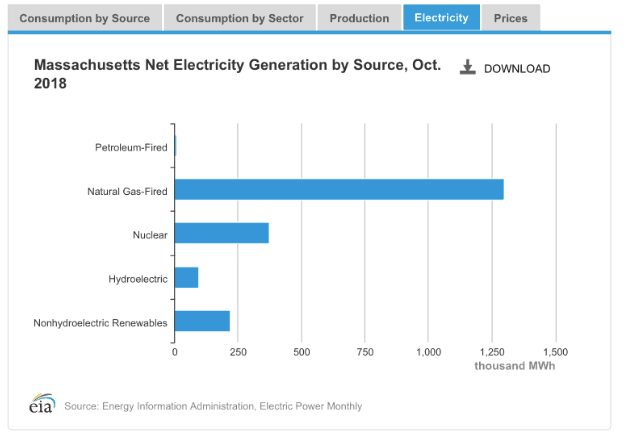 Nuclear fuels one-sixth of Massachusetts’ electricity needs. However, the state’s sole nuclear facility, the Pilgrim Nuclear Power Plant, plans to shut down operations in the spring of 2019.

The plant has been shut down for an increasingly high percentage of days per year – in the first half of 2018, it had already shut down for more days than in the past four years altogether, says WBUR news. The difficulty of maintaining the aging reactor has triggered these increased shutdowns. The future of nuclear power in the state remains shaky at best.

Renewables have powered one-sixth of electricity production in Massachusetts since 2017, says the EIA. Since 2008, wind and solar have increasingly gained prevalence; these green energy technologies have been surging ahead of some conventional fossil fuels. By 2030, Massachusetts will require utilities to source 35% of their power from renewable sources, according to The New York Times. 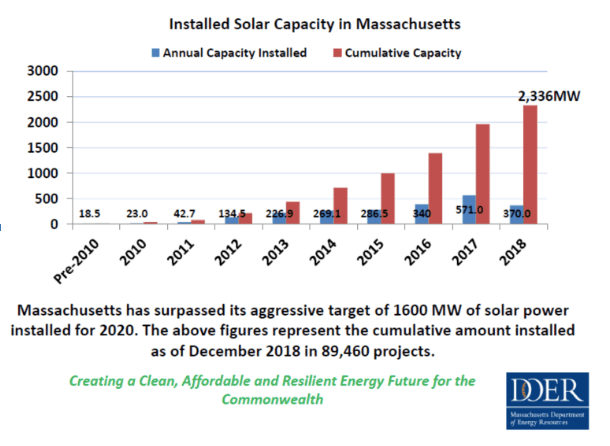 Making use of its geographic location, Massachusetts has ambitious plans for leveraging offshore wind in its energy portfolio. Onshore wind developments have taken place along the coast and in the mountainous area in the northwestern part of the state. Although the EIA notes that less than 1% of the state’s electricity generation was sourced from wind in 2018, that number is likely to rise very soon. Look out for increased investment in renewable electricity generation sources, which will continue phasing out certain fossil fuels in the coming years.

Coal production has plummeted quickly and dramatically in Massachusetts. In just a few years, it has fallen from powering a quarter of electricity production to virtually nothing, says the Union of Concerned Scientists. In 2017, the state powered just 4% of its electricity generation with coal.

Coal isn’t the only fossil fuel that’s losing ground. Petroleum-powered electricity generation fell to 0.5% between 2010 and 2012 as green energy proliferated, although a slight increase did follow that decline, says the EIA. (In 2000, petroleum-powered the production of one-fifth of the state’s energy.)

Massachusetts is rolling out a groundbreaking new energy-saving plan, which will motivate customers to reduce their consumption. For instance, the plan will provide incentives to switch to electric heat pumps rather than relying on oil and propane furnaces, says MassLive. With the state planning to produce 2000 MW of wind and 1600 MW of solar by 2020, Massachusetts is set to remain a leader in both green energy and energy savings initiatives.