Although coal remains widely used throughout the world, coal-powered electricity is under attack as countries and the private sector are increasingly seeing more options to generate electricity supply for a service area.

The U.K. plans to cease all coal-powered electricity production by 2025, and in the U.S., coal consumption is dropping to the lowest level in nearly 40 years. Some plants are being converted to biomass-fueled power plants to make use of the massive amount of existing coal plant infrastructure, the BBC reports. 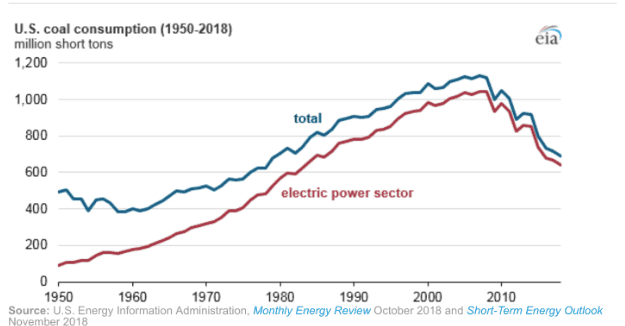 Coal-powered electricity production releases a tremendous amount of toxins that harm human health and the environment. Coal plants release 42% of mercury emissions in the U.S. and a vast amount of sulfur dioxide, nitrogen oxides, and particulate matter, which can cause severe health issues such as asthma or heart conditions, asserts the Union of Concerned Scientists.

All these toxins have severe environmental impacts, which in turn harm human health. According to the U.S. Energy Information Administration (EIA):

Those living closest to a coal plant or mine often suffer the most harmful effects due to their increased exposure to pollutants.

Coal-powered electricity production consumes an immense amount of water, second only to the agriculture industry in the U.S. Water is often used to clean the coal after mining. It also aids in transport from the mine to the power plant through a slurry pipeline, among other uses, notes the Union of Concerned Scientists.

Coal mining causes severe land degradation. Coal is typically excavated via large-scale strip mines that follow coal seams near the surface of the earth. Mountaintop removal coal mining has degraded landscapes throughout much of the Appalachian region while also polluting water systems by releasing toxic runoff.