HomeResidentialHow Does Maryland Produce Its Electricity?

How Does Maryland Produce Its Electricity?

Maryland has worked hard to ramp up its energy efficiency, set goals for lowering emissions from energy production, and build its renewable energy generation capacity. “In 2017, Maryland ranked among the top 10 most energy-efficient states in the nation,” says the Environmental Information Administration (EIA).

Here are Maryland’s primary sources of electricity generation, ranked by their current contribution to the state’s net electricity budget.

Maryland has one nuclear power facility—Calvert Cliffs, located on the shore of the Chesapeake Bay—which contains two nuclear reactors. Together, they produce 34.1% of Maryland’s electricity.

According to the Nuclear Energy Institute, the availability of nuclear energy stabilizes prices in the energy market by ensuring a constant supply of power to the grid. The state’s nuclear reactors have operated 99.9% of the time over the past three years. 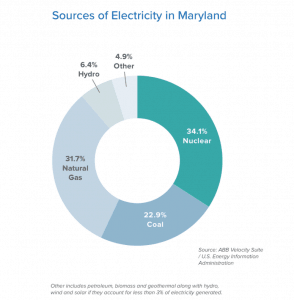 Natural gas remains an important contributor to the state’s electricity generation portfolio, providing 31.7% of the state’s power—making it second only to nuclear.

Many of Maryland’s coal-fired power plants can use natural gas to produce electricity as well. Some are working to replace coal-fired electricity with natural gas, say the Baltimore Sun’s editors, although they view this as a step away from the renewable energy goals the state’s legislature set in early 2019.

As in many other states across the country, as the price of natural gas has become more competitive, coal has decreased as an electricity generation source. The use of coal power has been declining, accounting for less than half of Maryland’s electricity production since 2012 and decreasing steadily.

Three of the state’s coal-fired plants are on track to shut down by mid-2020. As mentioned, some are also working to convert to natural gas.

By 2017, renewables made up 10% of Maryland’s electricity-generation portfolio. This includes hydropower, solar, wind, and biomass. Hydropower makes up the largest share, with the Conowingo hydroelectric plant producing 572 megawatts as of 2017.

The state has vowed to produce 50% of its electricity from renewables by 2030.

In 2016, solar power surged past biomass and wind, becoming the next-largest source of electricity to hydropower. In Somerset County, the state’s largest solar initiative is in the works, spanning a number of properties. This solar project will have the capacity to produce 150 megawatts of power.

However, some stakeholders believe renewables need to become a higher priority.

“In April, the Maryland General Assembly approved legislation mandating that at least half of the state’s future power needs be supplied by renewable energy by 2030,” say the Baltimore Sun’s editors. However, they assert that most of Maryland’s renewable energy currently comes from other states.

Wind and biomass account for a relatively small portion of the state’s renewable energy generation portfolio—about 1.5% and 1.6%, respectively. However, the state does have a high potential for onshore wind development on its eastern shorelines and in its mountains to the west. Further, a large offshore wind initiative located 17 miles off the coast, on track to start functioning in 2020, will generate up to 250 megawatts of power.

The coming years will show whether scaling up renewable electricity production will allow the state to provide for more of its energy needs in-house. In the meantime, as in many other states, the future of electricity generation remains a hot topic in Maryland.