HomeResidentialHow Does Connecticut Produce Its Electricity?

How Does Connecticut Produce Its Electricity?

Despite its high electricity prices, Connecticut’s electricity consumption is quite low. “Demand for air conditioning is low during the mild summer months, and only about one in six Connecticut households use electricity as a primary source for home heating in winter,” says the Environmental Information Administration (EIA).

However, as electric cars gain popularity, demand will probably only rise.

That said, Connecticut has substantial means of producing its own power. While the state doesn’t hold any fossil fuel resources, its renewable-generating capacity is sizable.

Connecticut’s energy grid is quickly transforming as inefficient plants shut down. Today, coal and electricity combined provide less power than biomass, which is responsible for 2.5% of the state’s electricity production. 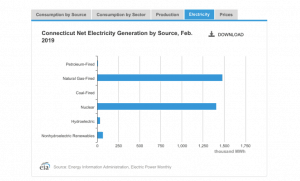 Natural gas and nuclear power account for about 95% of Connecticut’s electricity generation. Currently, natural gas has a slight lead over nuclear.

Natural gas, much of which is produced in Pennsylvania’s Marcellus Shale, is brought to Connecticut’s power plants via pipelines. Before the Marcellus Shale boom, most of this natural gas came from Canada.

Investment in natural-gas-powered energy continues. A Florida-based company called NTE is currently constructing the Killingly Energy Center, expected to become a major generator of electricity from natural gas in the state. This 650-megawatt, $700-million plant will be the largest new power plant built in the state in more than a decade.

Only three other states rely on nuclear power for their electricity to a greater extent than Connecticut. The Constitution State houses one nuclear power plant where it generates its nuclear power – the Connecticut Millstone plant, one of two nuclear plants left in New England. Dominion Energy, Inc., the owner of the facility, came to an agreement with state utilities in spring 2019 to keep the plant open for another ten years.

This decision marked a significant moment for nuclear in Connecticut as natural gas has been a tough competitor for every other source of power. In December 2018, the state agreed to purchase just over half of Millstone’s output for the next ten years.

According to the EIA, renewables supplied just under 5% of Connecticut’s total electricity generation in 2017. The state plans to continue developing its solar power potential as well as wind power generation along the coastline.

Because coastal areas hold the most promise for wind, the state is expanding its offshore wind infrastructure. Together with New York, New Jersey, and Massachusetts, Connecticut is joining a $70 billion offshore wind initiative meant to transform the way the region produces electricity. The states plan to add over 25 gigawatts over the coming 15 years.

Hydroelectric power also makes up a minor portion of Connecticut’s energy budget, accounting for 1.2% of the state’s electricity generation.

In the coming years, look out for further transformation of Connecticut’s energy grid as renewables gain steam.