Electricity rates are not usually something that most people think about every day until the end of the month when the unpleasant surprise arrives in the form of an energy bill. If you’ve always wondered why your electric bill varies from time to time, who is the company whose letterhead your bill arrives on and how do the average electricity rates by state vary on average, we have the answers.

Share this Interactive Energy Rates by State Map On Your Site

The national average retail electricity price per kWh is 10.48 cents per kilowatt hour.

Are electricity prices going up or down? The truth is that it varies across the states. You can find your state in the below table to check if you are paying a higher average price per kWh for electricity than last year.

Residential Electricity Rates by State in 2021

*Based on the estimated electricity usage of 900 kWh per month.

The Cost of Electricity by State

To understand why the average electricity rates by state vary, let’s look at the stages that the electric power passes from being generated to powering your house.

Conditions for these stages are different in every state. For example, the more it costs in a particular area to generate energy, the more it will cost per kilowatt-hour (per kWh). Hawaii has the most expensive electricity because its surrounded by nothing but the ocean, it has to import almost all of its energy sources, which adds greatly to the costs. It’s hard to enjoy sipping from a coconut shell on the beach when your electric bill consumes a big chunk of your monthly income.

Imagine that you would only be able to buy groceries from one supermarket – the one closest to your house – and as a result, this supermarket would be able to charge you a lot higher prices. This was the state of the energy industry in the US, before deregulation and energy choice.

In 1978, the federal government passed the Public Utility Regulatory Policies Act (PURPA), leaving it up to individual states to decide how to supply energy to energy users; but it wasn’t until the late nineties when the first deregulated states, California, Texas, Rhode Island, New York, Pennsylvania, and Massachusetts grew into true competition energy markets.

What energy deregulation means in practice for the customers in 18 US deregulated states is that, though your state utility still has the mandate to deliver electricity to your home and ensure the operability of the electric grid, you have the right to choose who will supply the electricity, based on competitive electricity prices.

Because of the complexity of such a decision, you can use a website, like ElectricRate to help you make the right energy choice. We review, compare and vet the majority of the retail electric providers. All you need to do is to enter your zip code and see what residential electricity rates and energy offers are available in your area.

How is Energy Generated?

There are generally two types of energy sources that are used to power your household or a business:

In the US, the majority of consumed energy by the residents come from non-renewable sources, such as crude oil, natural gas, and coal. However, consumption of renewable energy is steadily growing, as a result of the decreasing technology costs and growing concern over the environment. 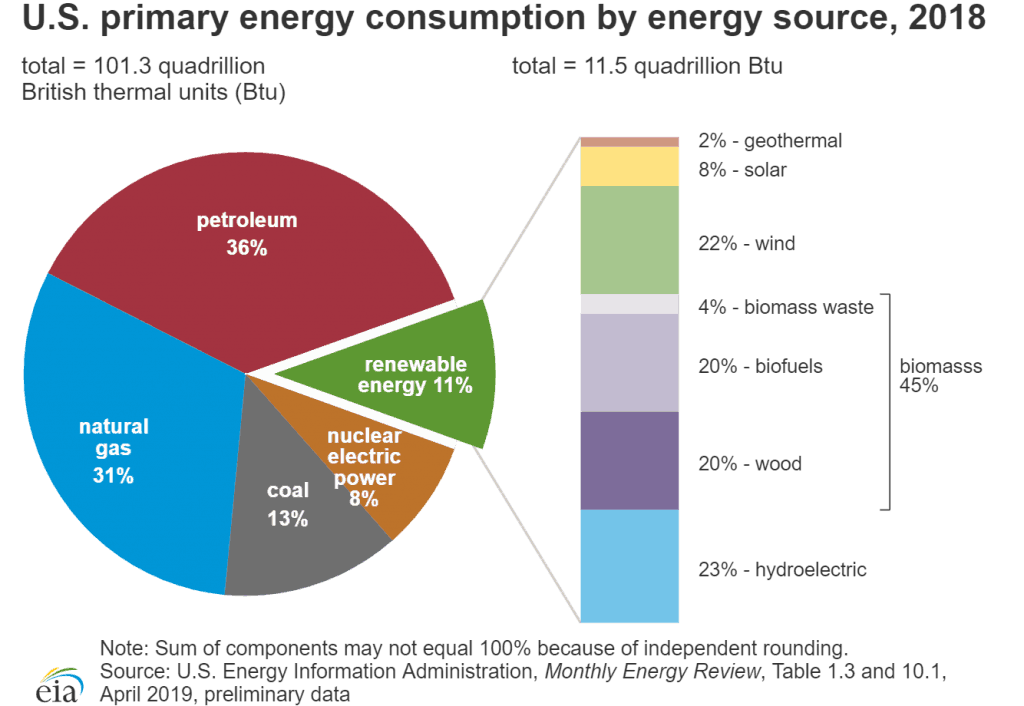 In fact, more than half of the US states have in place something called a Renewable Portfolio Standard (RES), that requires energy providers to source a certain amount of energy from renewable sources. As a result, retail energy suppliers are obligated to offer at least one partially or fully renewable energy plan in the energy markets. If you are not keen to get your energy from non-renewable power plants, you can compare the green energy rates by state on ElectricRate.

Wondering what’s the greenest state? It is officially Vermont with the highest share of in-state electricity net generation produced by renewable resources – 99.7% in 2018 and almost no reportable CO2 emissions generated by the power industry. Well done, Vermont!

You could be missing out on some great monthly savings by not questioning every tiny detail of your bill. Let’s look at its key components:

How you are billed for electricity actually matters a lot. An electric supplier can bill you a fixed rate every month, or let the energy prices fluctuate. Below is a brief overview of the most commonly offered electric rates:

Know What Makes Up Your Final Charge

The electricity price is always expressed in units, such as cents per kilowatt hour. When you multiply the price by your average monthly usage, you should get a good idea about the bill you can expect at the end of the month.

The other component of your bill will be the transmission and delivery service charges by your utility, which will remain the same, even if you switch to a retail electric supplier. By switching, the part of the bill that will vary will be the electric supply charge.

The advertised electricity rates you will find on electric suppliers’ websites are almost always based on specific energy usage and they vary, according to how much electricity do you use on a regular basis. The key to avoiding unnecessarily high energy costs is having a good idea about how many kWh / month does your household or business use.

The easiest way to find out how much power you use is to look at one of your energy bills, but there are also various online tools to help you estimate it. For comparison, a U S residential customer consumes an average of 914 kWh per month.

You might not be able to influence, that the average price of the state electricity rates in South Carolina is 12.71 cents kWh, but only 11.65 cents kWh in North Carolina. However, there are multiple factors that influence electricity prices and it’s good to be aware of them:

The rest is your energy choice! One thing is for sure – don’t wait to compare available energy rates. You might find a great deal in your state.

In the states with energy choice, business customers are able to take advantage of cheaper rates too. On average, an American business consumes approximately 6,189 kilowatt-hours of electricity per month for which it pays monthly an average price of $660.32.

Let’s have a look at the average energy rates by state for commercial and residential customers. Don’t be surprised at the price difference for residential electricity rates in the United States!

If the above left you craving for some more energy information, here are the answers to some of the questions you might have about electricity rates by state:

What state has the highest electricity rates?

That would be Hawaii where the average retail electricity price is 29.18 cents per kilowatt-hour. The reason is that as an island-based state, Hawaii has to import almost all of its energy, adding to the costs.

Where is the cheapest electricity in the USA?

Surprisingly, the title of the cheapest electricity state is given to Louisiana with an average retail electricity price of 7.71 cents per kilowatt-hour.

What state has the highest electric bill?

The electric bill is always calculated, based on the amount of consumed energy and the price per unit. The energy usage is really key, since, without it, it is hard to estimate your monthly bill.

This post has probably left you pondering two thoughts. First, electricity is actually a pretty complex topic with many factors contributing to the cost of electricity in each state and the cents per kilowatt hour price. The second is that there are quick and convenient ways to ensure you don’t pay more than what you have to for energy rates. To start, you can enter your zip code and compare available energy offers in your area. You might find a deal well worth switching and you’re on your cents per kilowatt hour price. How do you feel about the rates? Do you find the energy rates by state prices fair?