From traditional sources like coal to up-and-comers like wind and solar, here’s how Texans get their electricity.

Though Texas led the country in oil production in 2016, it has also achieved impressive results with alternative fuels. These up-and-coming energy production leaders are on track to dominate electricity generation in Texas in the not-so-distant future. This could possibly improve Texas residential electricity rates and commercial energy rates.

The major sources of electricity in Texas include the following:

Texas produced over 25% of the natural gas used in the U.S. in 2016, according to the U.S. Energy Information Administration (EIA)–making natural gas a cornerstone of the Texas economy. More than 25% of known natural gas reserves within the U.S. are located in Texas, says the Texas Office of the Governor. Natural-gas-fired power plants accounted for 162 of Texas’ 340 electric power plants in 2016, producing 50% of the state’s total electricity generation.

Among renewables, wind is the major player in Texas. In fact, Texas has led the country in wind energy for years, thanks to the strong winds of west Texas, says Scientific American. “Since 2014, Texas wind turbines have produced more electricity than both of the state’s two nuclear power plants,” says the EIA. Wind generated one-eighth of Texas’ total electricity in 2016, and at least 24,000 wind industry jobs exist thus far, making wind an increasingly key part of the economic landscape in Texas.

Coal accounted for 32% of Texas’ energy production in 2016. Lignite coal found in large belts in east and central Texas has historically accounted for much of Texas’ electricity-producing coal, as well as bituminous coal in other parts of the state. However, these plants are increasingly being retired as renewables become more competitive and coal less so. Shutting down some of the oldest coal plants tightens the coal supply and makes prices more competitive for the remaining ones, explains the Houston Chronicle.

While its solar capacity lacks the strength of its wind-powered electricity generation thus far, Texas plans to triple its solar production between 2018 and 2020. As of March 2016, solar already employed 7,000 people in Texas. Because there will be more tax credits for solar than wind in the coming years, expect to see solar investment ramping up. 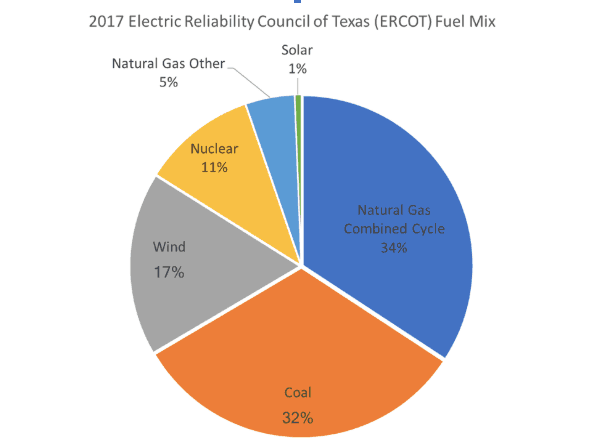 Nuclear power produced 9% of the total electricity in Texas in 2016, says the U.S. Department of Energy. Texas has two nuclear plants, which each have twin reactors, and exports about 2% of the electricity it produces with them. Plans are in the works to build several more nuclear power plants due to their cost-effectiveness and competitiveness in the market.

Share on FacebookShare on TwitterShare on PinterestShare on RedditShare on Email
Prev Post
3 Surprising Benefits of Nuclear Energy
Next Post
Why Does the PECO Price to Compare Change Often?