HomeGeneralHow Many Electric Cars are on the Road Today?

How Many Electric Cars are on the Road Today?

Electric cars are growing in popularity year after year. Learn why and find out what the future may hold.

The electric car industry is booming. In some countries, electric cars are quickly becoming more the norm than the exception. Look at Norway – in 2019, electric car sales reached a record high, constituting almost 60% of total car sales.  Meanwhile, China purchases more than half of all the new electric cars going onto the market, largely due to government incentives. 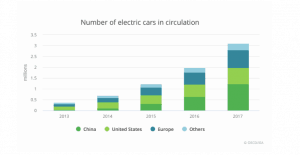 Why the Surge in Electric Vehicles?

The following factors have been propelling the increase in the number of electric cars on the road:

The functionality of electric vehicles has been steadily increasing, making them a more practical option. In 2019, the average battery life of all electric cars on the market will exceed 200 miles for the first time, reports Amanda Myers in Forbes.  An increase in the availability of fast charges in public places also makes electric vehicles more practical. In 2017, there were 430,000 publicly available chargers around the world, the IEA reports.  The cost of production has dramatically dropped, too – the cost of lithium-ion batteries has plummeted by 80% since 2010 and is expected to fall by another 45%.

Owning a vehicle that uses renewable energy may reduce your carbon footprint. Stricter emissions regulations and growing concerns about mitigating climate change have made electric cars an appealing option.  With electric cars growing consistently more affordable, it’s clear why more and more people are making the leap to electric.

By 2025, experts predict that electric cars and hybrids will account for 30% of all vehicle sales. Sales in the U.S. are expected to reach 1.4 million that year, according to a report by the Edison Electric Institute and the Institute for Electric Innovation.

If world leaders take a more aggressive approach to reducing emissions, that number could mushroom to 220 worldwide.  Government policies will need to address the rising demand for the cobalt used to produce lithium-ion batteries in order to keep costs manageable.  “Utilities will continue playing a key role in EV deployment by building charging infrastructure, providing incentives to increase consumer demand, and ensuring that charging is a grid benefit,” writes Myers.

Because concerns about one’s carbon footprint are likely to continue to increase, electric cars have a promising future. Consumers willing to invest in an electric vehicle, solar roof, and in home charging station can completely eliminate their carbon footprint as it relates to auto travel.  Interested in purchasing one? Edmunds provides ratings of current models to help you navigate this important decision.